Click on a question to find out more on that topic:

What is CO2 capture and storage (CCS)?

Why is CCS needed to reduce emissions?

How is CO2 captured?

How is CO2 stored?

What is a hydrocarbon well?

Why would a hydrocarbon well be re-used?


What is CO2 capture and storage (CCS)?

CCS technology captures carbon dioxide (CO2) from large emitting sources and stores it permanently in the deep subsurface, facilitating significant cuts in CO2 emissions from industrial and power sectors. The CCS chain comprises three main elements: the capture, transport and storage of CO2. An overview is provided in this short (4 minute) video. 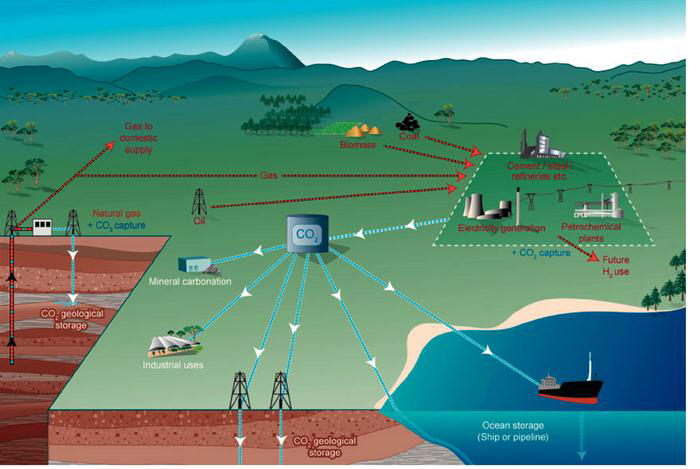 CO2 capture: CO2 capture can be applied to numerous sectors including the power sector (coal and gas fired), waste incineration, cement and steel production and also during the production of hydrogen. Several capture technologies exist which separate CO2 from the gases produced during power generation and industrial processes. The CO2 is most commonly captured by post-combustion, pre-combustion or oxyfuel combustion technologies. These capture technologies target different stages of the energy conversion process.

CO2 transport: After separation, the CO2 will be transported to the storage site. For large-scale commercial projects transportation will be via pipeline or ship. Millions of tonnes of carbon dioxide are already transported annually for commercial purposes by road tankers, ships and pipelines. The pipes used for transportation onshore are usually buried and far from populated areas. Multiple technologies are deployed to monitor and detect any potential leakages.

CO2 storage: Finally, the CO2 is injected into deep underground formations (kilometers below the surface). This can take place both on and offshore. The formations can be either saline aquifers (porous rocks filled with salty water) or depleted hydrocarbon fields. This permanently stores the CO2, preventing it being emitted to the atmosphere and therefore preventing the CO2 from contributing to climate change.

In 2019 the 21 CCS sites in operation and construction had the capacity to capture and permanently store around 40 million tonnes of CO2 every year (more information is available in the Global CCS Institute's Global Status Report). To put this in perspective, about 43 billion tons of CO2 are currently emitted to atmosphere worldwide per year. In addition to the commercial scale operational sites, there are also 39 pilot and demonstration scale CCS facilities (operating or about to be commissioned) and 9 CCS technology test centers.

More than 30 new integrated CCUS facilities have been announced since 2017. If all these projects were to proceed, the amount of global CO2 capture capacity would more than triple, to around 130 Mt per year. More can be found on the future for CCS on the IEA website.

Why is CCS needed to reduce emissions?

At present there is consensus that the global climate is changing as a result of increased atmospheric concentration of greenhouse gases such as CO2. The increasing CO2 concentration is directly linked to emissions of CO2 from the abundant application of fossil energy sources. Despite the efforts directed at increasing the efficient use of energy resources and applying sustainable energy technology at large scale, the world still heavily depends – and will most likely depend in the next decades – on fossil fuels. The challenge is to develop technology options that allow for this continued use of fossil fuels without substantial emissions of CO2 while maintaining industrial competitiveness in global markets.

In addition, several industrial processes such as cement production emit CO2 as part of the process. Cost-effective CO2 capture, transport and storage (CCS) in geological systems could bridge the transition period required to further develop and implement sustainable sources of energy and new low-carbon industrial processes. CCS will be required together with renewable energy and energy efficiency improvements to achieve the emission reduction targets by 2050.

CCS technology deployment is therefore recognized as crucial to limiting global temperature increases to below 2°C and averting the worst impacts of climate change. Modelling of the different scenarios required to limit warming to below 2°C, and the role CCS can play, is available on the IEA website.

How is CO2 captured?

Post-combustion processes separate CO2 from combustion exhaust gases. CO2 can be captured using a liquid solvent or other separation methods. CO2 only forms a small fraction (typically 3–15% by volume) of combustion exhaust gas streams, the main constituent is nitrogen (from the air). In an absorption-based approach, once absorbed by the solvent, the CO2 is released by heating to form a high purity CO2 stream. This technology is widely used to capture CO2 for use in the food and beverage industry.

Pre-combustion: fuel is converted into a gaseous mixture of hydrogen and CO2. The resulting mixture of hydrogen and CO2 can then be separated into a CO2 gas stream, and a stream of hydrogen. The hydrogen can be burnt without producing any CO2; the CO2 can then be compressed for transport and storage. The fuel conversion steps required for pre-combustion are more complex than the processes involved in post-combustion, making the technology more difficult to apply to existing power plants. On the other hand, the high concentrations of CO2 produced by the shift reactor and the high pressures often encountered in these applications are more favorable for CO2 separation.

Oxyfuel combustion uses oxygen rather than air for the combustion of fuel which produces exhaust gas that is mainly water vapor and CO2. This results in a flue gas with high CO2 concentrations (greater than 80% by volume) that can be easily separated to produce a high purity CO2 stream. 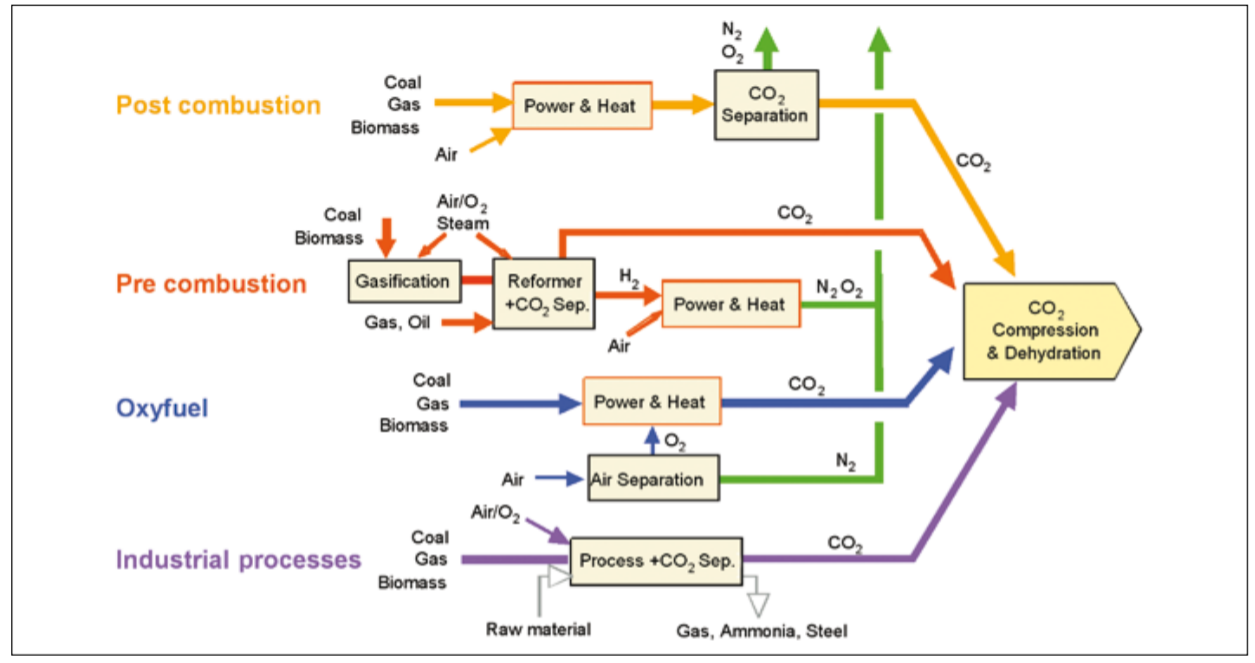 How is CO2 stored?

Once the CO2 has been transported to the storage site it is then injected into porous geological formations that are typically located one or two kilometers under the earth’s surface. The CO2 is often transported and injected at pressures and temperatures such that the CO2 will be in the dense phase.

Porous rock formations that hold or (as in the case of depleted oil and gas reservoirs) have previously held fluids, such as natural gas, oil or brines, are potential candidates for CO2 storage. Suitable storage sites include former gas and oil fields, deep saline formations (porous rocks filled with salty water), or depleting oil fields where the injected CO2 may increase the amount of oil recovered. Depleted oil and gas reservoirs are more likely to be used for early projects as extensive information from geological and hydrodynamic assessments is already available. Deep saline aquifers represent the largest potential CO2 storage capacity in the long term but are currently less well understood and would therefore need further characterization to be ready for CO2 storage.

Storage of CO2 in deep, onshore or offshore geological formations uses many of the same technologies that have been developed by the oil and gas industry and has been proven to be economically and technically feasible. There is already considerable experience with injecting CO2 deep underground for storage at a number of industrial-scale CCS projects. These storage sites have been carefully selected and the evidence from monitoring shows that the CO2 has been completely and safely locked into the geological formations. CO2 has been injected for more than 30 years in enhanced oil recovery (EOR) projects and saline formation storage projects are on-going, with, for example, the Sleipner project operating since 1996. 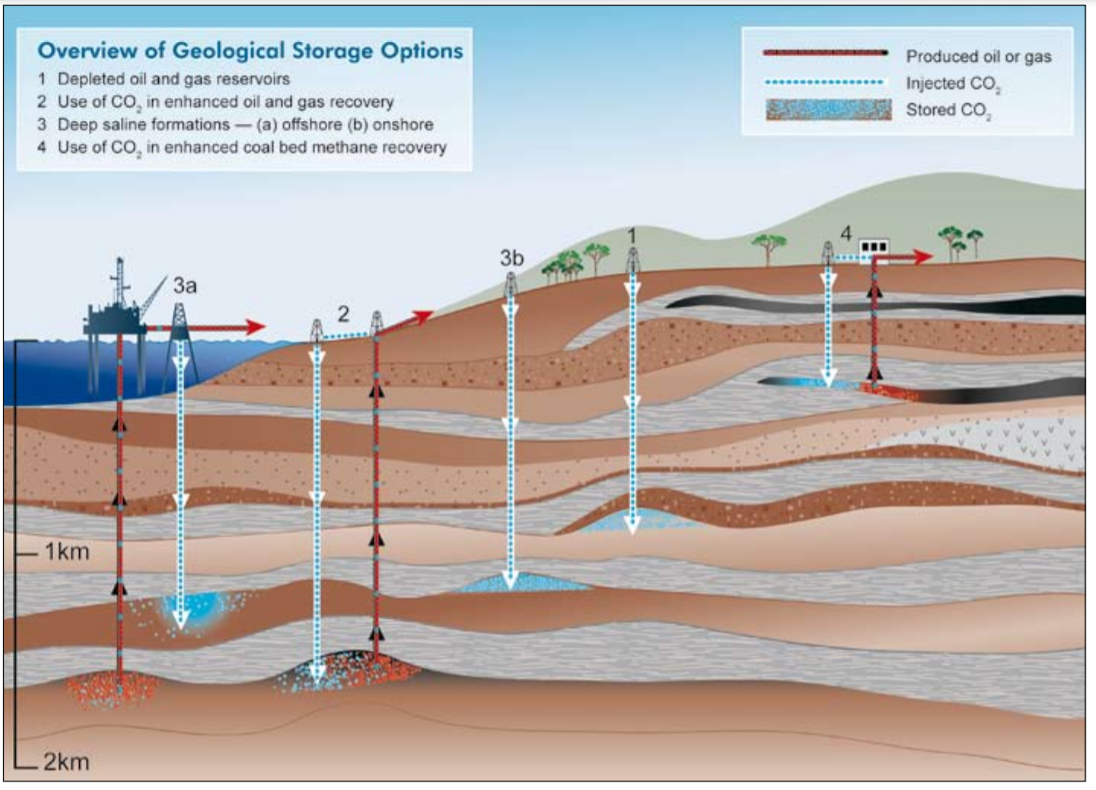 What is a hydrocarbon well?

A hydrocarbon well is an elongate hole dug into the Earth and equipped with steel tubulars and cement that serves the purpose of bringing oil or other hydrocarbons, such as natural gas, to the surface. Oil wells almost always produce some natural gas and frequently bring water up with the other petroleum products. Well drilling technologies are well developed and well operations are well understood. For example, 184 drilling rigs were present in the North Sea as of January 2018 (Source: Statista).

The surface infrastructure required to drill the well will vary greatly depending on whether the well is on or offshore and the depth of the well to be drilled. The typical structure of a well below the ground surface is given below: 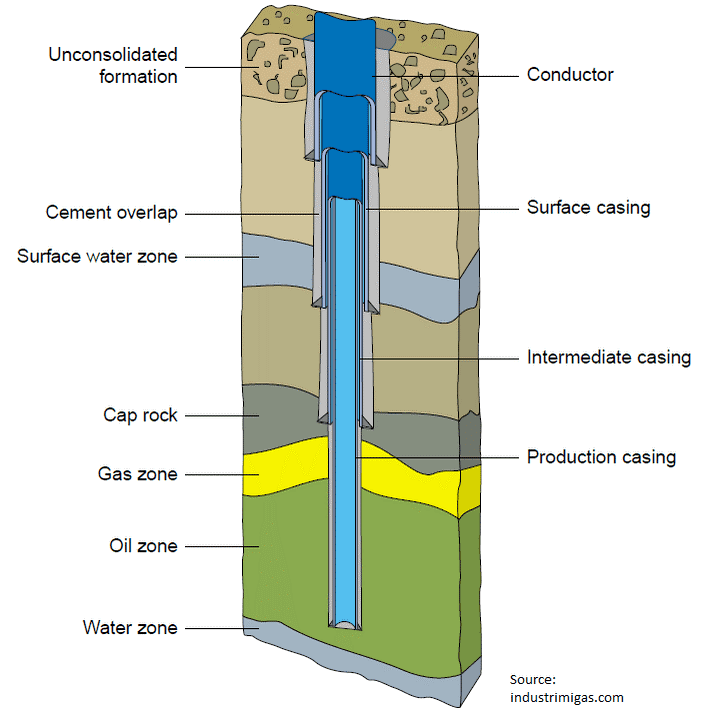 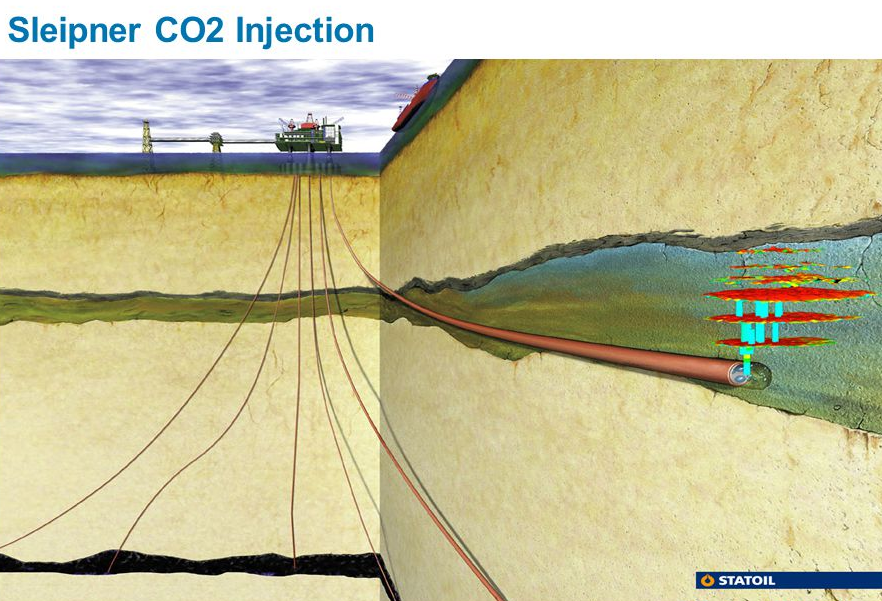 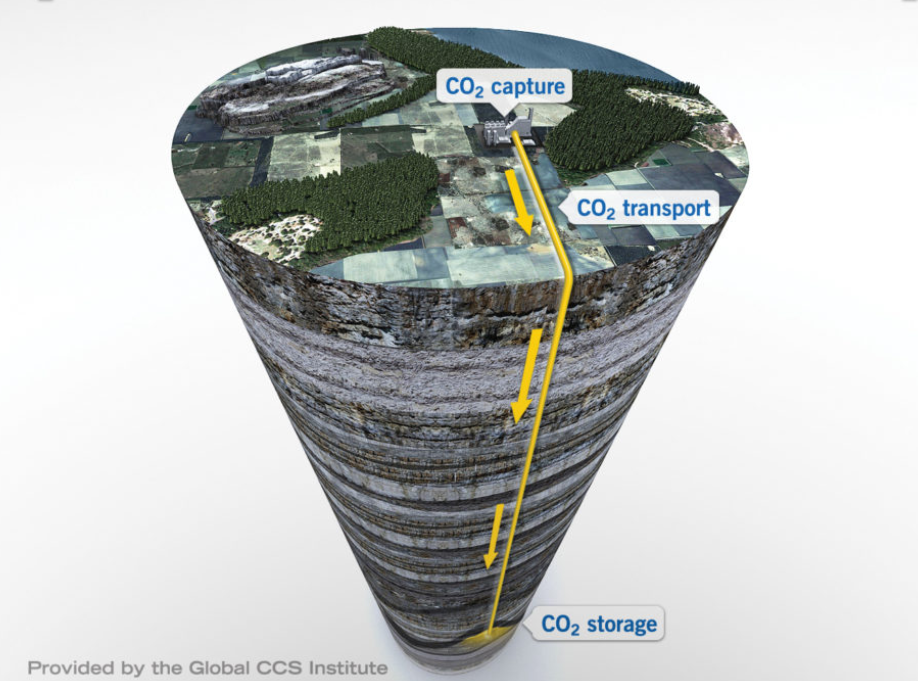 Why would a hydrocarbon well be re-used?

The oil and gas industry has built extensive infrastructure for the production and transport of hydrocarbons. This infrastructure could be re-used for the transport and storage of CO2. An increasing number of fields have come to the end of their production lifetime and are earmarked as potentially valuable assets for initiating large-scale CCS operations.

The existing wells in these assets present both opportunity and challenges. Substantial savings could be realized by re-using these wells as CO2 injectors, monitoring wells, or for water production (to manage pressure in the reservoir). On the other hand, technical, commercial and regulatory aspects need to be taken into consideration before a well can be deemed reusable as part of a CCS project. For example, there are different design requirements for CO2 injection versus oil and gas production, with differences in operating criteria, such as temperatures, pressures and fluids in the well. Also, the technical state of the well after years of use in hydrocarbon operations must be carefully examined. In addition, once CO2 has been stored, monitoring must be undertaken at the surface to make sure there is no leakage occurring.

Re-use can benefit projects in all geological settings but may be particularly crucial for offshore environments, such as the North Sea or the Gulf of Mexico, where well development costs are significantly higher than in onshore environments. The reuse potential of existing hydrocarbon fields and wells will require a dedicated investigation encompassing the interrelated technical, environmental, economic and social aspects.